The unexpected nightlife of turf algae

Institute for Biodiversity and Ecosystem Dynamics (IBED)
05-JUL-2022 - Coral reefs host a complex underwater metropole of organisms living by their own day and night rhythms. A new study by Benjamin Mueller and colleagues shows that the nighttime activity of one reef inhabitant, the turf algae, might be affecting the entire reef food chain. On July 5th their findings are published in the scientific journal Functional Ecology.
Share this page

Coral reefs thrive in the largely deserted tropical ocean; and it is all thanks to photosynthesis by algae and corals. The algae and corals use around half of the converted solar energy to grow and reproduce. Residue energy is stored in dissolved organic substances and eventually released into the water. These precious resources do not go to waste. They fuel the growth of bacteria in the water, which in turn can be eaten by other animals. This recycling process of energy is called the 'microbial loop'. Generally, the release of dissolved organic substances is high during the day. At night, when there is no photosynthesis occurring in the dark, the release drops sharply.

"During my PhD I investigated the effect of light on the release of dissolved organic substances in several corals and algae. As expected, in the dark the release was strongly reduced. Also, more dissolved organic substances were released under high light intensities compared to moderate light," Benjamin Mueller explains. However, when looking at turf algae he was surprised to find that they show the highest release rates in the dark. "Initially I thought that we made a mistake. Somehow the samples must have gotten contaminated, or something went wrong with the chemical analysis."

What looked like a mistake at first turned out to be a very important finding. It is presumed that the high nighttime release in turf algae is likely caused by cyanobacteria, which are capable of fermentation in the dark. Cyanobacteria are increasingly abundant in turf algae communities. A diverse team of researchers from the Netherlands, Germany and the United States was put together to help investigate the phenomenon.

The team set up an experiment to measure the release of dissolved organic substances from turf algae during day- and nighttime. The so-called day-substances and night-substances were then fed to heterotrophic bacteria to see how effectively they use them to grow.

The results show that while bacteria absorb the night-substances much faster, they are unable to effectively use these materials to grow. Instead, they respire them and release CO2. The higher quality day-substances are consumed and turned into bacterial biomass much more efficiently, which benefits the reef. "These newly grown bacteria can then be consumed by filter feeders and other bacterial predators. In this way energy and nutrients initially stored in dissolved organic substances enter the classical food web," Mueller explains. 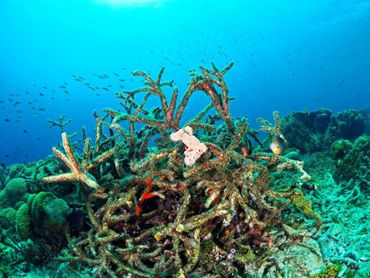 A change over time

Curaçaoan coral reef communities drastically changed over the past decades. First they were primarily dominated by corals and calcifying algae, but now there is a more dominant presence of fleshy algae and turf algae, that contain cyanobacteria. The team was interested in comparing the day- and nighttime release of dissolved organic substances in present day versus several decades ago. Mueller: "Our calculations suggest that in the past around two thirds of the dissolved organic substances were released during the day and only one third during the night. Today up to half of the dissolved organic substances may be released at night." This influences the entire reef system, as precious energy is lost in respiration instead of entering the classical food web.