The Bonaire palm: a critically endangered palm only found on Bonaire

BonBèrdè, Dutch Caribbean Nature Alliance (DCNA)
20-NOV-2019 - A recent scientific publication report describes the critically endangered Bonaire palm for the first time. Although the palm was already documented in 1979, it took till 2019 before scientists identified it as native solely to Bonaire. With only 25 mature individuals left, conservation efforts must be taken immediately to ensure this species will remain part of the Bonairian landscape.
Share this page The recently released publication ‘Sabal Lougheediana (Arecaceae), a critically endangered, endemic palm species from Bonaire’ clearly described this unique palm that is only found on Bonaire, for the first time. It belongs to the Sabal palms, a family of palm trees with 17 identified species. Although these palms have been identified in scientific literature within the Antillean islands before, it wasn’t until 2017 that the first dedicated research was conducted on Bonaire. Once these palms were more closely studied and compared, it soon became obvious that there was a clear distinction between the Sabal palms on Bonaire and those found on the neighboring island Curacao. This was the first time Sabal lougheediana was identified and characterized.

Distinction from other palms

Although the new palm is similar to its sister species Sabal antillensis, clear delineations can be made based on their appearance. For example, the Bonairian Sabal or ‘Bonaire Palm’ appears to be slightly taller than its sister species and capable of holding up to 35 leaves at its crown. The leaves themselves are also quite different: the Bonaire palm has more spikey, stiff leaves when compared to the more flexible leaves of S. antillensis. In addition, the Bonaire palm has unique scaring, left from fallen leaves, which can be seen along the entire length of the trunk.

Wild Bonaire palms can only be found within a very small area: in the south of the island, west of Lac Bay and north of the Cargill Salt flats. Its ability to grow along the limestone flats is unique to this particular palm. Its sister species is more notably found along the mudstone hills, at higher elevations. Its small range, coupled with the limited number of mature individuals has earned the S. lougheediana an IUCN Red List criteria rating of Critically Endangered. In fact, a 2018 survey identified only 25 reproductively mature individuals on the island. It now inhabits only about 20 percent of the land it was found on during a previous survey conducted in 1979. This highlights the fact that this unique palm has a dwindling population. Conservationists are concerned that grazing pressures from herbivores are threatening the ability for the palm to repopulate.

Securing a future for the Bonaire palm 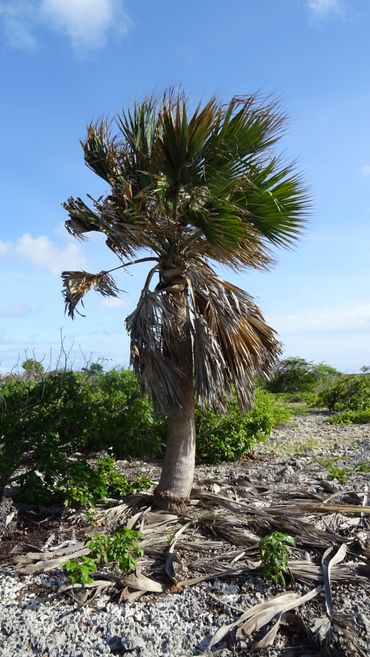 To ensure this unique and important Bonaire Palm will have a place in the future, it is important that conservation efforts are put into place to protect it. To start, physically protecting these palms against herbivores, such as installing fencing will give new Bonaire palms a chance to grow. In addition, efforts to cultivate and grow additional palms in other areas can help expanding its habitat and population.

To serve as a beacon of hope, conservation efforts for the S. antillensis have seen positive growth trends in recent years, showcasing how an increased public awareness and proper environmental management can serve in protecting these species. Clearly distinguishing these two species was an important first step in fully protecting this exclusive palm on Bonaire. Heightened awareness and a concerted effort to protect these few remaining specimens may be all that is required to reverse this trend and ensure this palm has a place within the Bonairian landscape for generations to come.