Grasshopper sounds now available for everyone on Xeno-canto

EIS Kenniscentrum Insecten, Naturalis Biodiversity Center, Xeno-Canto
09-NOV-2022 - Since October 2022, Xeno-canto, the largest website for sound recordings of birds, has been updated with grasshoppers. This opens the possibility for naturalists to share recordings of grasshoppers. It also facilitates the identification of grasshoppers, even with sounds which are not audible to the human ear. This is the first step towards expanding Xeno-canto to all animal sounds.
Share this page Delen op Facebook Delen op Twitter The website xeno-canto.org is well known by people who record bird sounds or want to learn more about them. The website contains recordings of sounds of about 10.000 bird species. The species list of the 30.000 grasshopper – Orthoptera – species has now been added to the website. A substantial part of all grasshoppers produce sounds. 1500 sound recordings of more than 170 European species have already been added. Bob Planqué of Xeno-canto adds with a smile: “But we expect that the number of recordings will rise quickly.”

Up until now only compressed formats – mp3 – could be uploaded. The technique of the website is updated, and all relevant recent formats can be uploaded, like WAV-files. Recordings can be saved in standard (CD) quality of 44.1 kHz sampling frequency, but also in high resolution, for example 384 kHz sampling frequency. This makes it possible to upload and play sounds above 20 kHz, which are inaudible for the human ear. More so than in bird song, these ultrasound sounds are important in grasshopper songs. Especially in bush-crickets, the loudest part of the song is ultrasound. “We make the ultrasound sounds audible by playing them ten times slower,” Baudewijn Odé explains. “When playing the song, you see the oscillogram, a sound wave in time, and a spectrogram, showing the pitch of the sound in time. The location and more details of the recording are also displayed.” 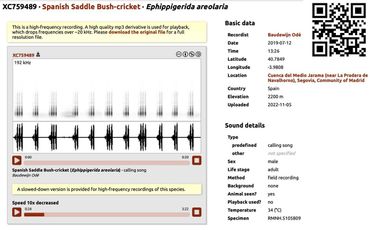 Hopes for the future

“We expect that not only grasshopper enthusiasts will help in the growth of the collection of sound recordings; we think that recordists of other animal groups will take the opportunity to expand their horizon,” Bob Planqué says. As soon as the collection is large enough, it will be possible to develop automatic recognition software for grasshopper sounds. “Hopefully we can recognize all kind of species in all kinds of recordings. But that will be something for the future.”