In 2000, CARMABI launched a reforestation project on Klein Curaçao. Preliminary results inspired a similar project on Klein Bonaire, which began in 2006. The ecosystems on both islands are showing promising results. During visits in June and July 2013 to both islands, Dr. Dolfi Debrot from the IMARES Wageningen University Research Center, described the results as “astounding”. On Klein Curaçao, more than ten native plant species have been reintroduced and are successfully reproducing and on Klein Bonaire large specimen of fruit-bearing trees can be found again which will provide a food source for birds that have not been observed on the island for years.

Continuously doused in salt spray, battered by trade winds and subject to arid limestone soil and scorching sun, Klein Curaçao, with its small size (70 hectares or 173 acres) and flat surface, is one of the most barren landscapes in the southern Caribbean region.

Grazing by feral goats has been a predominant problem on both islands for over a hundred years, but whereas on Klein Curaçao the original native tree vegetation had totally disappeared due to phosphate mining and overgrazing, on Klein Bonaire (600 hectares or 1,490 acres) the ecosystem suffered severely from wood-cutting for charcoal.

When in 1996 the government of Curaçao secured the grazing rights on Klein Curaçao, the emaciated livestock was removed from the island and this cleared the way for CARMABI to arrange several replanting campaigns between 2000 and 2009. The goal was to reintroduce native beach vegetation and pioneering plant species so as to jump-start the reestablishment of natural habitats on this once densely vegetated island. On Klein Bonaire, in 2006, 2007 and 2009, STINAPA Bonaire and CARMABI have planted native tree species, such as ‘Watakeli’ (Bourreria succulenta), ‘Mansaliña Bobo’ (Metopium brownei), and Myrcia curassavica, which have all but been lost from the island. The results of both reforestation projects are quite remarkable considering the extremely dry climate and barren environment especially on Klein Curaçao. This offers high hopes for other islands in the southern Caribbean region with similar problems and climates. 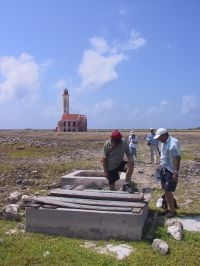 The focus on Bonaire was firstly on plants that are low in number and under threat of becoming locally extinct (such as the native Sabal palm (Sabal causuarium) and the rare endemic tree Myrcia curassavica) and secondly on plants that play a significant ecological role as a fruit or flower source for birds or other fauna, such as ‘Watakeli’ (Bourreria succulenta), ‘Mansaliña Bobo’ (Metopium brownei), ‘Palu di Huku’ (Jacquinia arborea) and ‘Palu di Rhambèshi’ (Sideroxylon obovatum). On Klein Curaçao, the harsh climate caused a large part of reintroduced plants to perish before taking root, but hundreds of planted trees and shrubs managed to grow to a considerable size. The most abundant tree species is the ‘Mangel Blanku’ or Buttonwood (Conocarpus erectus), a mangrove-like tree of which several specimen are larger than four metres high and of which seedlings and young trees are widely spread on the island. The removal of the goats from the island has given ground-covering species a chance to flourish and has resulted in extensive grass fields, dominated by ‘Korta-Man’ (Cyperus planifolius). The most abundant shrub species is the Sea Lavender (Mallotonia gnaphalodes), locally known as ‘Tabako di Piskado’, growing predominantly along the beaches, just like the locally endangered Beachberry (Scaevola plumieri), which, on Curaçao, is only found on Klein Curaçao. During the assessment, flowers, seeds and seedlings of 16 of the reintroduced species were recorded, which means that these species are already reproducing self-sufficiently in different parts of the island. 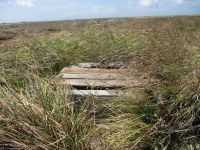 Similar results have been obtained for Klein Bonaire where now mature ‘Palu di Huku’ (Jacquinia arborea), ‘Watakeli’ (Bourreria succulenta), ‘Mansaliña Bobo’ (Metopium brownei), ‘Lumbra Blanku’ (Erithalis fruticosa) and ‘Uña di Gatu’ (Pithecellobium unguis-cati) trees were found blossoming and already carrying fruits. These trees enrich the vegetation and produce food for endangered bird species during the dry season. In the past, the Scaly-naped Pigeon (Patagioenas squamosa) and the Yellow-shouldered Amazon Parrot (Amazona barbadensis) occurred on the island, but they have disappeared over the decades. Since the reforestation efforts ended in 2009, some Scaly-naped Pigeons have started to return to the island and hopefully before long the Yellow-shouldered Amazon will follow.

Plants form the driving force of an ecosystem and without plants the biodiversity usually remains low. The fact that plants are starting to do well on Klein Curaçao again has even led to the appearance of native butterfly species on the island. The small Gray Ministreak (Ministrymon azia) now occurs along the entire west coast of the island and during other seasons the blue Hemiargus hanno and the brown Bubastus Hairstreak (Strymon bubastus) appear on the island. The native bird the Bananaquit (Coereba flaveola) was also introduced (three individuals) but has since disappeared from Klein Curaçao around two years ago. However, the endemic Striped Anole (Anolis linearis), an insectivore tree lizard, of which more than 30 were re-introduced to the island, seems to fare well in this environment.

These projects demonstrate that, once the threats have been addressed, with the right choice of species, locations, planting techniques and timing, it is possible to begin reforesting an ecosystem with very limited resources. Natural phenomena like shade, leaf litter and shelter from wind can once again be found on Klein Curaçao, which also provides a chance for the more vulnerable plant species to develop. In turn, the roots of the developing vegetation help keep the soil in place and prevent erosion. The re-emerging ecosystem helps to hold sand in place to prevent erosion and will help protect Klein Curaçao in the face of climate change and sea level rise.

These reforestation projects give testimony to the devastating effect of grazing by feral goats, but also show that when measures are taken to control grazing, the indigenous flora and fauna can quickly bounce back, especially when given a helping hand.