The Vikings were a tough crowd, but according to Njal’s Saga (written in the 13th century) they were terrified by the calls and wailing of what they thought were trolls, and ‘night ravens’ along the coasts of western Scotland and Wales. Almost definitely, these creatures were Manx Shearwaters, a seabird that only visits the nesting colonies at night. 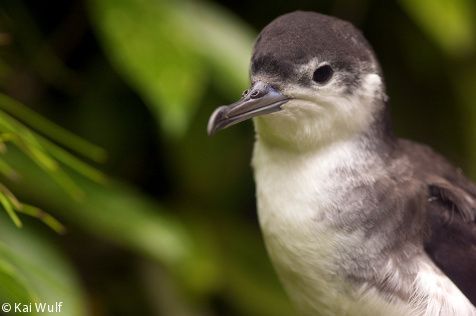 Manx Shearwaters and their slightly smaller tropical cousin, the Audubon’s Shearwater, spend the day far out to sea, and are known to dive to 35 metres to feed on squid and a variety of fish. Black above and pure white below, this 180 – 230 grams bird is about 30 centimetres in length and has a wingspan of about 70 centimetres. It is called shearwater for the way it tilts to the left or right, ‘shearing’ through the wind and taking advantage of the uplift from the winds over the sea surface. A member of the genus ‘Puffinus’, so called because the young were fat (or ‘puffing’) they were often caught and eaten with potatoes or salted and stored in barrels for the winter, or to sell. Archaeological sites throughout the Caribbean contain remains of Audubon’s Shearwaters, as historically they were an important source of protein. Even today, another seabird from a different family, and commonly known as a ‘Puffin’, is considered a delicacy on the Faeroe Islands and Iceland.

The common or English name for Audubon’s Shearwater, was given for John James Audubon, the bird artist who illustrated the Birds of America and became the best known painter of American birds. But the bird’s full scientific name is Puffinus lherminieri, in honour of Felix Louis l’Herminier, a French naturalist whose father was exiled to the French colony of Guadaloupe [he later wrote a seminal paper on the structure and sternum – breast-bone - of birds, and was welcomed to France and given the title of Royal Naturalist].

The Vikings were not the only ones to be wary of these nocturnal seabirds. Throughout the Caribbean, Audubon’s Shearwater and closely related species have gained a devilish reputation because of their strange nocturnal calls. Caribbean people have used the name ‘diablotin’ or ‘devil bird’, and sometimes the locations where they would be heard is named after them, for example, Mourne Diablotin, (Devil mountain) on Dominica. Other names for these mysterious and raucous birds are onomatopoeic that phonetically try to imitate the call, thus ‘Chokwèkwè’ is sometimes used on Bonaire, Curacao, Aruba, and ‘Wedrego’ is commonly used on Saba, and St. Eustatius. The Wedrego of Saba is so deeply ingrained into the culture that it is the National bird and is shown on the island’s crest. Well, almost. In fact, the head of the bird on Saba’s crest more closely resembles the European Manx Shearwater, and perhaps the artist was more familiar with that species? But, in truth they do look very similar.

Audubon’s Shearwater are perfectly adapted for life at sea, and this includes their feet being located at the back of their body so that in combination with their wings they can propel themselves ‘flying’ underwater, chasing and then catching fish with their sharply edged beak. These perfect adaptations for feeding at sea become a liability when the bird comes ashore to breed, as they can only shuffle to their burrows after a less than delicate landing. This makes them vulnerable to predators such as cats, rats, and in the past, humans. Consequently, the Wedrego of Saba may be avoiding predators by nesting in remote areas or along precipitous cliffs where it is more difficult for predators to reach.

It is in part because of their nocturnal behaviour that these birds are relatively poorly known. However, most detailed studies of Audubon’s Shearwater within the Caribbean have taken place in the Bahamas where fortunately the nesting areas are low-lying and easy to access. In general, Audubon’s Shearwaters are thought to be declining throughout the Caribbean but there is insufficient information to confirm this view.

Coordinated by the Saba Conservation Foundation (SCF), with support from DCNA, Vogelbescherming, Kansas University, and AES Inc., studies of the Wedrego status, distribution, nesting success and threats have recently begun on Saba. However, the precipitous landscape does not make it easy. Consequently, a variety of different techniques are being used to identify where they nest, and how many individuals may be present. These methods include, comparing the habitat of areas where birds are heard calling verses those areas where there is no calling, recording their calls, and subsequently analysing them digitally to recognise males and females, and individuals. This vocalisation recognition technique (or voice recognition) assists in ‘fingerprinting’ individuals and thereby knowing the number of individuals and whether they return in subsequent years. Where feasible and safe, field surveys are being conducted in likely nesting areas and if possible we hope to use specially modified RADAR to assist in locating highly probable nesting areas. Bird RADAR has been successfully used to detect the scale and distribution of similar shearwater species on Hawaii, and is also used to inform and minimise potential bird strikes by aircraft in Israel. All these approaches have their practical challenges and it may be some time before we have any real understanding of the status of Audubon’s Shearwater in the Dutch Caribbean.

Without the very basic understanding of the shearwater’s breeding status and threats, it is difficult to know how to manage or conserve them. Nevertheless, a collaborative draft species management and conservation plan has been written with input from SCF, DCNA, Rijksdienst Caribisch Nederlands (RCN), and other groups and technical experts.

Conservation science is always a challenge and for this species, we are really in the dark. However, just as I was finishing this article, news came that nesting Audubon’s Shearwater have been found at an undisclosed location on the ABC islands. This observation is the first confirmed nesting record for this species on any of the ABC islands, and is very exciting. Hopefully, this will be the start of more findings, and a greater understanding of this mysterious nocturnal bird. Armed with more information of their conservation ecology we can assist in their becoming a more widespread, populous, and sustainable species throughout the Dutch Caribbean. Vikings beware.