Saba and St. Eustatius are home to the Caribbean’s largest nesting population of Red-billed Tropicbirds and may host the most significant breeding colonies in the world. After a workshop in 2011, a monitoring programme was launched in which very poor breeding success for several Red-billed Tropicbird colonies on Saba was discovered. In an attempt to find out the cause of the lack of recruitment, it turned out that predation by feral domestic cats (Felis catus) was the reason and to date this remains a major threat to nesting colonies of the Red-billed Tropicbird (Phaethon aethereus) on Saba. Cats and rats both pose a potential threat to the survival of Saban tropicbirds. 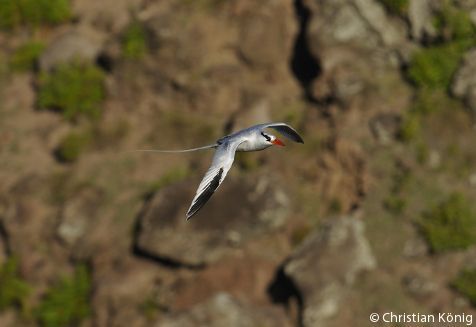 Feral cats have been a problem on Saba for a little more than a decade and cats have been unequivocally implicated in the depredation of tropicbird nests on Saba. Two recent studies have provided a greater understanding of the introduced predator/prey relationship on Saba. A study led by IMARES collected baseline data on cat and rat distribution as well as investigated cat diet and health. Additionally, a study conducted by Imperial College student Christina Chan analysed the camera trap data collected by Saba Conservation Foundation and STENAPA on St. Eustatius over the previous year with the aim of determining impacts of goats, cats and rats on tropicbird nesting success.

With baited camera traps that were deployed for a combined total of 142 trap nights and by collecting cat scat densities over 15 kilometres of transect from 11 trails, the IMARES study assessed cat density distribution among four habitat categories. This data was then extrapolated to a larger area. Additionally, the intestinal contents of 11 feral cats was studied.

Both cat scat densities and camera trap recordings showed large and statistically significant differences in cat density on trails between habitat zones. Cat densities in “trail areas” were lowest in the lush forest habitat found at higher elevations (4 cats/km2) and highest in dry woodland and coastal scrub trail habitat at lower coastal elevations (107-166 cats/km2). At the latter, cats were concentrated in more open areas where tropicbirds principally nest. Interestingly, from Chan’s analysis of the camera trap data, is the positive relationship between goat visitation and cat visitation to nesting sites on Saba indicating that goats may be facilitating cat predation by increasing visibility and accessibility to nests. Cat densities around the island landfill, where ample food sources are available to them, averaged 286 cats/km2. Constructing a varmint-proof concrete overnight pen for un-incinerated garbage could dramatically decrease the cat density at the site.

Rat densities, as documented using camera traps, were highest in the forest habitat where fruit trees are particularly abundant. Rat and cat density were markedly inversely related. Rats were the most important overall food species of the cats in all habitats, followed by reptiles and birds. However, at the landfill, where cat population densities were highest, birds and rats were strongly reduced in the diet, while garbage and reptiles were of greatly increased importance. Scats collected in the forest zone suggested a lower importance of rats as prey than at lower arid elevations. The cat scats collected in the urban environment had no prey species represented and were apparently all from well-fed house cats. The opportunistic and flexible food habits documented for cats in this study allows them to easily switch to preferred prey when available (for instance during the seabird breeding seasons).

Preliminary veterinary assessments on cats sacrificed at the landfill showed the animals to be in overall poor health. This suggest that releasing neutered cats into the wild is likely to be inhumane and caught feral cats should better be euthanised. Based on these results, the Saba Foundation for Prevention of Cruelty to Animals (SFPCA) has decided to discontinue its practice of releasing neutered cats into the wild.

An accompanying social study showed that only about 5% of pet cats on Saba have not yet been neutered. Two-thirds of the respondents believe feral cats on Saba are an environmental problem and a threat to wildlife and tropicbirds in particular. Three out of four respondents found registration, neutering and removal of cats from breeding colonies to be a good conservation strategy and euthanisation to be an acceptable method for use in cat control.

Saban authorities have had a rat control programme in place for more than 15 years now, but rats still remain a widespread and unrelenting problem on Saba. This suggests that the rats may well have become partly resistant to the main rodenticide used and that a switch to a different rodenticide is the next logical step. Alternating use of rodenticides is the most effective and internationally recommended practice for rat control. This is already being practiced on nearby St. Eustatius where rat problems are much less acute than on Saba, as evidenced by camera trap data. 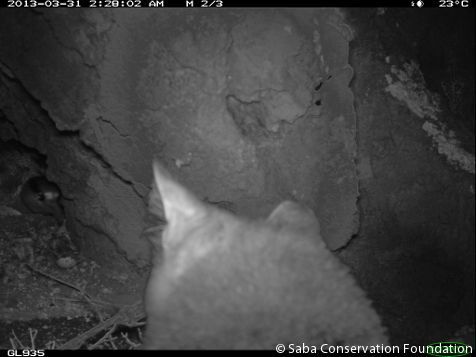 In order to decrease and eventually control the predation on Saba’s iconic Red-billed Tropicbird by feral cats and rats, a number of management measures are recommended. These include the above-mentioned concrete varmint-proof overnight pen for un-incinerated garbage to rid the landfill of the exceptionally high feral cat densities, stopping to release spayed/neutered cats back into the wild and judiciously using euthanisation to address the acute overpopulation of cats in particularly sensitive areas (such as the mapped seabird colonies).

Concerning future research, the impact of rats as predators should be investigated, not only with respect to Red-billed Tropicbirds, but to native forest species in general as well as the effect of feral cat removal on the breeding success of the Red-billed Tropicbird, on rat population density, and on the broader predator/prey relationships on the island.

Awareness and willingness of the Saban resident population towards measures against cats and rats are clearly high and for this reason, a wide management scope exists to implement these measures. However, for it all to succeed and keep public support levels high, this would need to be accompanied by active, effective and transparent communication to the general public.